What Is the Casio Privia PX-350 Digital Piano?

The Casio Privia PX-350 weighs approximately twenty-five pounds. This is a convenient weight, especially when considering how many high-quality digital pianos weigh between forty and sixty pounds or even more. The Casio Privia PX-350 is approximately eleven inches wide and fifty-two inches long. These measurements make fitting this piano into homes, studios, or stage settings convenient.

The Casio Privia PX-350 has eighty-eight keys, each of which has three sensors and is textured with ebony and ivory. The PX-350 has three different levels of touch sensitivity for its keys. The PX-350 features a scaled hammer action keybed as well as two hundred fifty built-in tones and one hundred eighty built-in rhythms. The scaled hammer action system of the keys adds weight to the bass and takes weight away from the treble. This effect makes playing the PX-350 feel more like playing an acoustic piano.

The tones are divided into categories called "song banks" that can be accessed from the control interface. The tones in the song banks include those of a grand piano. The tones are assisted by the Acoustic and Intelligent Resonator, or "AiR" for short, which is a tone generation system that pairs the correct piano sample with the music pattern of the player's fingers. In addition, the Damper Resonance simulator, which cooperates with the AiR system to affect the tones, mimics the effect of a damper pedal on the eighty-eight piano strings.

The Casio Privia PX-350 also includes one hundred twenty-eight notes of maximum polyphony that add to the volume ability of the piano. All the features of the keys and the tones make the PX-350 useful both as a digital piano and as a digital keyboard.

USB Connection, LINE IN, LINE OUT, and Warranty

The Casio Privia PX-350 features a USB connection that can connect to computers and tablets and that also allows for MIDI connections to MIDI devices. The PX-350 also includes both a LINE IN and a LINE OUT, as well as two headphone jacks, each a quarter inch in size. These headphone jacks can work for duets and private sessions between teachers and students. The warranty for the digital piano lasts for a year from the day of purchase.

The PX-350 enables its user to use different tones and volumes of sound easily and intuitively. The light weight makes setting it up and moving it around a breeze.

The USB connection enables the piano to connect to computers, tablets, and MIDI devices.

The piano is designed to mimic the feel of an acoustic piano and to be convenient to the user.

The warranty lasts for one year. An accident protection plan for three years can be added for around $9.

The Yamaha P-45, like the PX-350, features eighty-eight keys. It also features ten different voices that include samples from Yamaha acoustic pianos. The P-45 can play the samples with different levels of timbre and volume using AWM (Advanced Wave Memory). The P-45 includes a Dual Mode that allows two different voices to be played together. The P-45 features a Graded Hammer Standard system that simulates an acoustic piano, with more weight for the low end of the keyboard and less weight for the high end of the keyboard.

A power adapter, sustain pedal, and music rest are also included with the P-45. The P-45 enables a musician to change settings with one button. For example, the "GRAND PIANO/FUNCTION" button can be used to change voices, change the metronome's settings, and change other things as well. The P-45 is less than twelve inches in depth and weighs twenty-five pounds. This makes it convenient to use by a musician.

A musician can change settings with one button, adding to the convenience of this piano.

This digital piano has ten voices. There is no indication that it allows for connection with outside devices such as computers.

This piano is easy to use. However, it does not seem to allow for connection to outside devices like the PX-350 does.

The warranty lasts for one year. An accident protection plan for three years can be added for about $11. 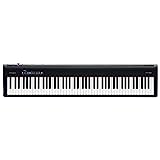 The Roland FP-30 features eighty-eight completely weighted keys that have five different levels of touch sensitivity. Its presets include thirty tones and thirty internal songs. The tones come from the Roland company's "SuperNATURAL Piano" sound engine. The FP-30 includes Bluetooth wireless connectivity that enables it to be used on the smartphone and tablet. The FP-30 features a damper pedal and includes the effects of ambience, brilliance, and resonance. It includes an amplifier and speakers along with a headphone output that allows for quiet keyboard playing that will not disturb other people.

The FP-30 has a built-in metronome. Its modes include Dual, Split, and Twin Piano Mode. With Twin Piano Mode, two piano players can play in the same octave range at the same time. The FP-30 includes USB support that enables a piano player to play along with SMF and WAV songs and to save songs that have been recorded by the FP-30's SMF recorder. The FP-30 has eight types of rhythms and, like the PX-350, has one hundred twenty-eight notes of maximum polyphony. The FP-30 has about the same length and width as the PX-350.

The dimensions of the FP-30 make it fairly easy to fit into different locations. However, the FP-30 does weigh more than the PX-350.

This digital piano has a wide range of sounds, Bluetooth wireless connectivity, and USB support.

The FP-30 is designed to not take up a lot of space and to recreate the feel of an acoustic piano.

You get a one-year standard warranty no matter what. Register your product within 60 days and the warranty will be extended to 3 years. 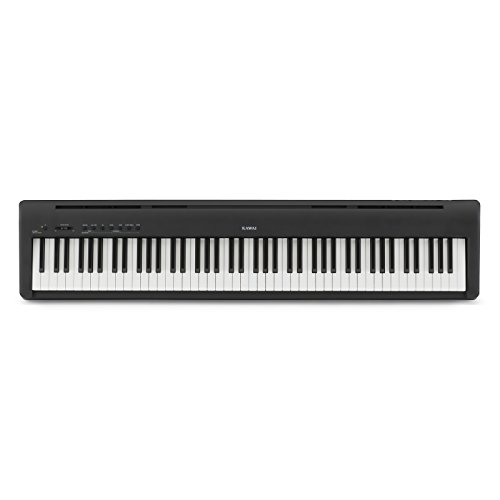 The Kawai ES110 features Harmonic Imaging sound technology. It includes eighty-eight grade weighted hammer action keys, a damper pedal, and nineteen voices. Its effects includes reverberations that can be in the modes of "Room", "Small Hall", and "Concert Hall". It includes Bluetooth wireless connectivity and compatibility with MIDI devices. It includes two headphone jacks and an audio output for connecting to outside speakers or recorders.

It features a song recorder that can record up to fifteen thousand notes and a built-in "Lessons" mode for student piano players. It features one hundred ninety-two notes of maximum polyphony, one hundred drum rhythms, and twelve demo songs. Its keyboard modes include "Dual" and "Split" modes. Its warranty covers labor and parts for three years. A three-year accident protection plan can be bought for around $12. The ES110 is powered by a power cable and an AC adapter. It weighs approximately twenty-seven pounds, and its approximate length and width are fifty-two inches and six inches.

It takes up about as much space as the PX-350 does, but it weighs slightly more than the PX-350.

It features nineteen voices, reverberations that can be in three different modes, Bluetooth wireless connectivity, and MIDI device compatibility.

This digital piano has several sound features that enable it to serve the various needs of its user. It is designed in a way that makes it convenient to use.

The warranty for the labor and parts lasts for three years. The accident protection plans for this digital piano are the most expensive ones on this list.

One advantage that the PX-350 has over both the ES110 and the P-45 is that its accident protection plans are cheaper. It has fewer levels of touch sensitivity for the keys than the FP-30, but it has far more built-in notes. An advantage that the PX-350 has over the ES110 and the FP-30 is that it weighs less than either of those digital pianos, making it more convenient to relocate.

What is our conclusion? The Casio Privia PX-350 has a wide range of tones and of maximum polyphony. It is cheaper than both the Kawai ES110 and the Roland FP-30, and it is fairly convenient to relocate if necessary. As a result, out of a rating of five stars, we give the Casio Privia PX-350 four stars. For more information on this digital piano, go to digitalpianoexpert.org.