In this article, we will discuss digital vs acoustic piano sound specifications, portability, features, maintenance requirements, and cost. The topics are ranked in order of their importance, as the piece is aimed mostly at beginners who are interested in purchasing their own instrument to practice their musical skills on.

Sound quality is the most important aspect to keep in mind when considering a musical instrument. From this point of view, it comes as no surprise that the acoustic piano is the superior choice from the perspective of digital vs acoustic piano sound. Depending on the skill of the player, it can produce melodies with a complex tone, color, and expression.

This is due to the very mechanism that lies at the core of an acoustic piano. The sound is transported through a wooden soundboard when a tiny hammer hits a string, which makes the tone warmer and more resonant. Unfortunately, the digital version can’t do much else except try and mimic this with sampling and speakers.

Needless to say, the resulting reverberations lack natural depth. Still, higher-end digital pianos outshine lower end acoustic ones as far as sound quality is concerned, in spite of their sampling-based sound source. Thus, it all boils down to the effect you are trying to achieve through your music from this point of view.

Touch sensitivity is perhaps the second most important feature to consider when discussing the digital vs acoustic piano perspective. On the one hand, acoustic pianos have an integrated action mechanism which allows for the tone and dynamic of the sound to be manipulated depending on finger strength. Thus, the player can achieve different shades for just one key.

On the other hand, digital pianos produce a sound as soon as your finger hits a key, and it isn’t influenced by the amount of pressure you apply in any way. Thus, the instrument lacks touch sensitivity, which is why many experimented players steer clear of it when making their choice. However, some manufacturers have found a partial solution to this issue.

Higher quality keyboards have touch sensitivity programmed into them to a certain degree, or they have weighted keys that try and emulate the same effect. However, their limitations still exist, as sounds usually end up sounding pretty much the same regardless of the strength and pressure variations you apply while playing. 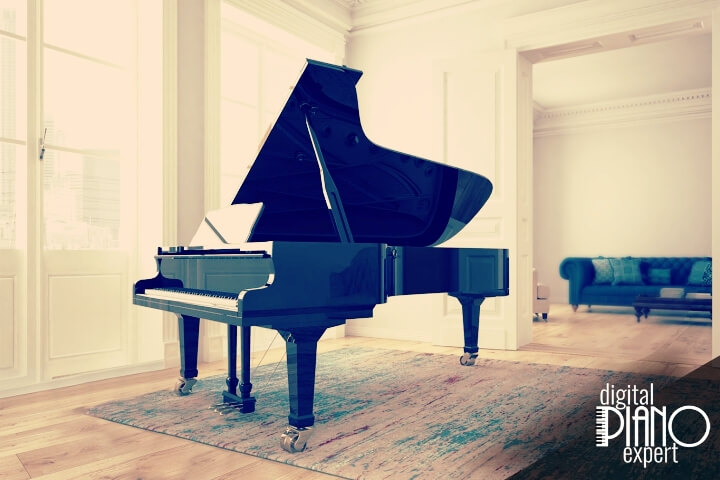 When it comes to matters of the portability of digital vs acoustic piano, the answer is obvious. Digital pianos are simply more travel-friendly than their acoustic counterpart. Upright acoustic vs grand piano, they’re both a pain to move around due to their hefty dimensions and robust weight. They look elegant in your living room, but good luck putting them in another space.

Digital pianos are usually smaller in size, and are thus the better alternative for musicians looking to play at various gigs, or even bands that are on tour. In fact, they are so convenient that it doesn’t usually take more than one person to take them to the place they need to be in. Transporting an acoustic piano involves a lot more muscles and wheels.

Nevertheless, an acoustic piano is a must in the case of classical music performances, as well as various other genres that incorporate piano pieces as a focal point of songs. One such example is that of musician Nick Cave and his band The Bad Seeds. Many of Cave’s songs contain piano segments, and he is a fan of the acoustic grand piano as evidenced in interviews.

Nevertheless, when on tour, the band goes for the electric version of the traditional grand piano, which weighs less and produces melodies of comparable quality. This is an acceptable caveat, as it does not sacrifice sound, while at the same time being convenient in terms of transportation and stage setup.

Acoustic pianos come with three separate pedals, namely the soft pedal, the sostenuto pedal, and the sustain pedal. They are used to either sustain or dampen the sound, and the latter is frequently used across all genres of music. The other two are much more seldom incorporated into songs, as they are limited to classical music.

Digital pianos don’t come with integrated pedals, especially when they are manufactured to be portable. Nevertheless, newer models come with them as accessories that can be attached and detached at ease, so that you can control volume and sustain notes. Still, the effect is not the same as it is for an acoustic piano.

Therefore, your choice should be based on your playing necessities. In the case of digital vs acoustic piano for beginners, the former is perhaps a much more suitable alternative due to its simplicity. What is more, if you purchase a model that has attachable accessory pedals, you can simply put them in once you feel more ready to experiment with your sound.

Nevertheless, it is important to mention at this point that digital pianos come with an additional set of features impossible to achieve on the acoustic version of the instrument without supplementary devices. They are what makes the keyboard much more appropriate for a musician that wants to experiment with something other than classical music. 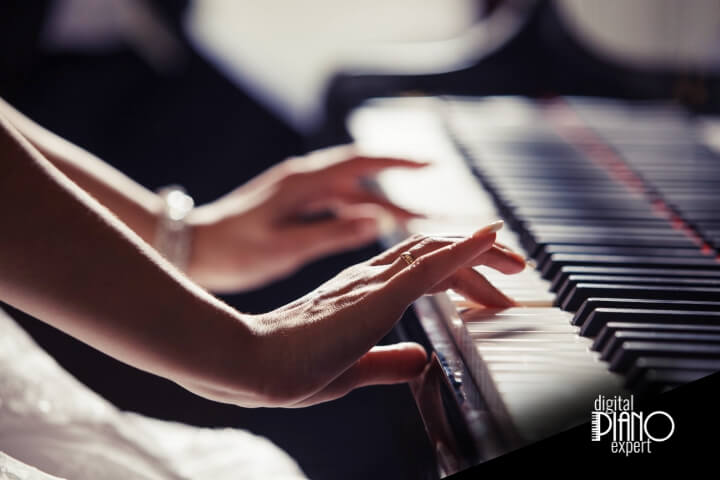 Many delicate parts go into the making of an acoustic piano, from the wooden exterior to the felt on the hammers and steel strings on the inside. The gears have to be properly tuned once or twice per year, and the instrument needs to be placed under strict humidity control. Thus, it is definitely the more high-maintenance option in the digital vs acoustic piano debate.

However, as long as an acoustic piano is properly maintained over the years, it won’t require many, if any repairs. Natural wear and tear don’t impact sound quality one bit, which means that you will surely get your money’s worth in time. Digital pianos are another situation entirely, as their electronic components are quite expensive to replace.

While it is true that a digital piano doesn’t require any tuning over the years, it will become obsolete with the passage of time, just like any other computer. Fixing its issues when this happens is often more expensive than investing in a new keyboard altogether, which means that this type of instrument is certainly not justifiable in the long run.

In fact, a digital piano with all the best features included shouldn’t cost you more than 3,000 dollars a pop. This is for a model that resembles an acoustic instrument as closely as possible. Still, you should remember that an acoustic piano is an investment that will last a lifetime, while digital pianos become obsolete with age, much like any other electronic device.

When it comes to choosing between a digital vs acoustic piano, the outcome is up to interpretation. Both instruments have their advantages and drawbacks, which is why the most important aspect here is to closely assess your personal needs as a musician. With those in mind, you will certainly make the right decision.