To learn how to read sheet music is to mind-meld with the composer. This is best explained by novelist Stephen King. When asked what writing is, King said it has all the elements of ESP. He creates a story in his mind. He translates this story into words, which are recorded in book form. A reader deciphers those words, moving the story into his/her brain.

Quick Navigation
What Is Music Note Reading?
Where Did Sheet Music Come From?
Importance of Music Sheet Reading Skills
How to Read Sheet Music
Conclusion

What Is Music Note Reading?

Sheet music is a highly efficient way of notating all the elements of a music composition on a sheet of paper (or computer or tablet screen) so that you or someone else can play the song written. This includes all the notes that are to be played in any one moment, how long they are to be played, and how they are to be played (hard/soft, loud/quiet, quick/sustained). It can also tell you which instruments should be playing the notes, what percussive instruments should be doing, and what words (down to the syllable) vocalists should sing at what notes.

In short, learn how to read sheet music, and you know how the composer intended every element of a song.

Where Did Sheet Music Come From?

It is hard to imagine today, but until about 140 years ago, the only way to hear music was live. Of course, mechanical instruments, including clocks, music boxes, and player piano precursors go back much further. However, these hardly reproduced music with anything we would consider a composer’s nuance. There is a reason we criticize some music as “mechanical.”

It wasn’t until 1877 when Thomas Edison demonstrated his newly-invented phonograph by recording himself singing “Mary Had a Little Lamb.” That was the first time anyone had ever heard live music played back.

Though there are forms of music notation dating as far back as 2,000 BC (on a stone tablet), what we know as modern sheet music began to appear shortly after Gutenberg invented and popularized mass-printed books. Starting about 1520, people could learn how to read sheet music and purchase printed copies. 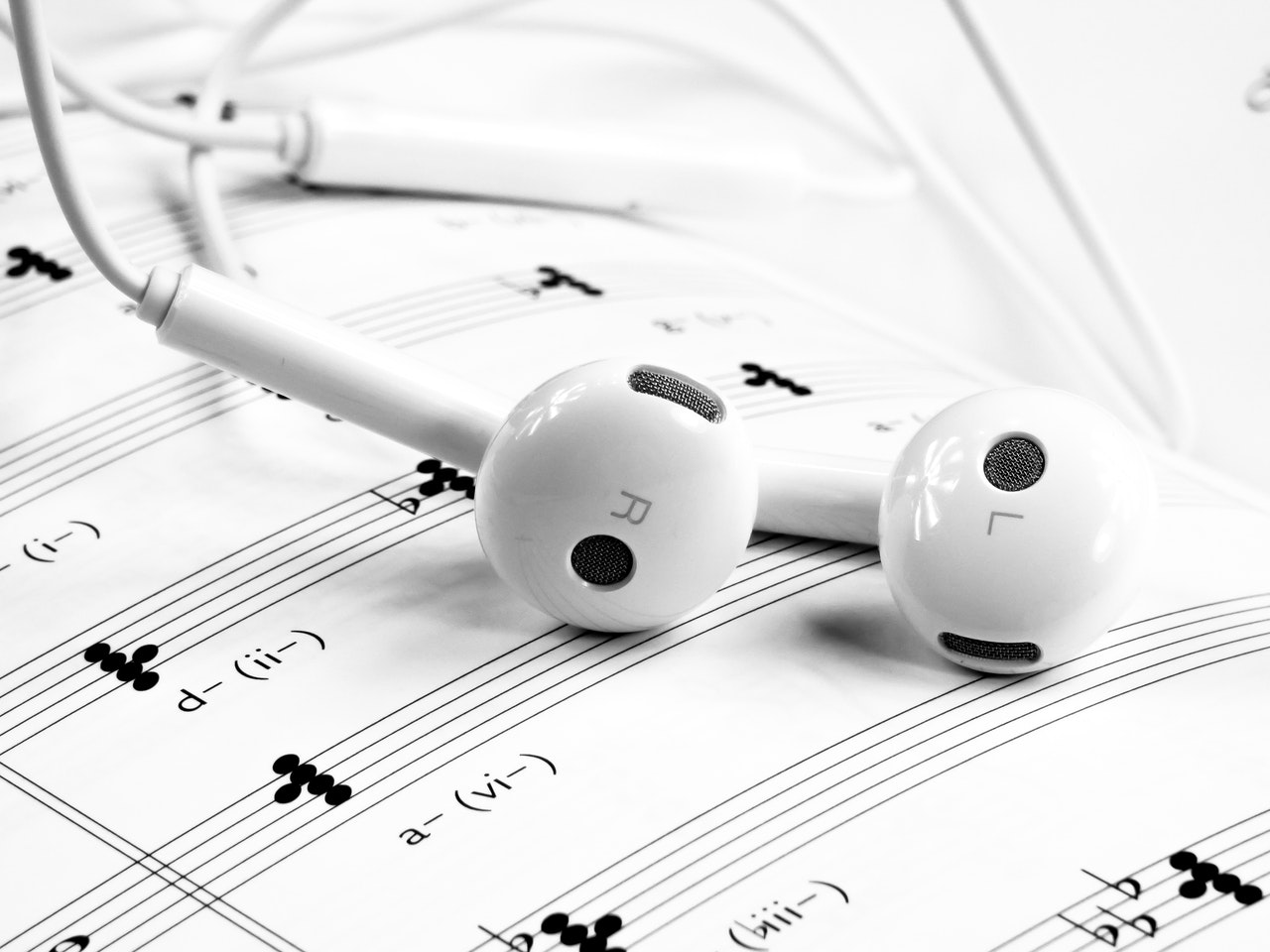 Much as mass access to printed books spurred cultural revolutions, mass access to printed music spurred musical revolution. Now a composer’s new ideas could be shared rapidly and relatively inexpensively. The composer himself no longer had to travel to share his works. Far away musicians could learn how to read sheet music and bring his compositions alive from the printed page.

It is notable that many of the classical composers we know best, including Pachelbel, Vivaldi, JS Bach, Handel, and Mozart thrived in a time when being able to learn how to read sheet music became more commonplace. The details of their compositions were recorded in better detail so that today’s musicians can play them in much the same manner as they were intended.

Even after Edison’s phonograph invention (and improvements on it) made pre-recorded music commonplace, sheet music remained the primary way music was published. Through the early 20th Century, a thriving sheet music industry hawked the latest popular songs heard in dance halls and nightclubs. Families wealthy enough to have their own pianos would learn how to read sheet music, purchase copies of the latest hits, and invite friends over to enjoy their amateur renditions. 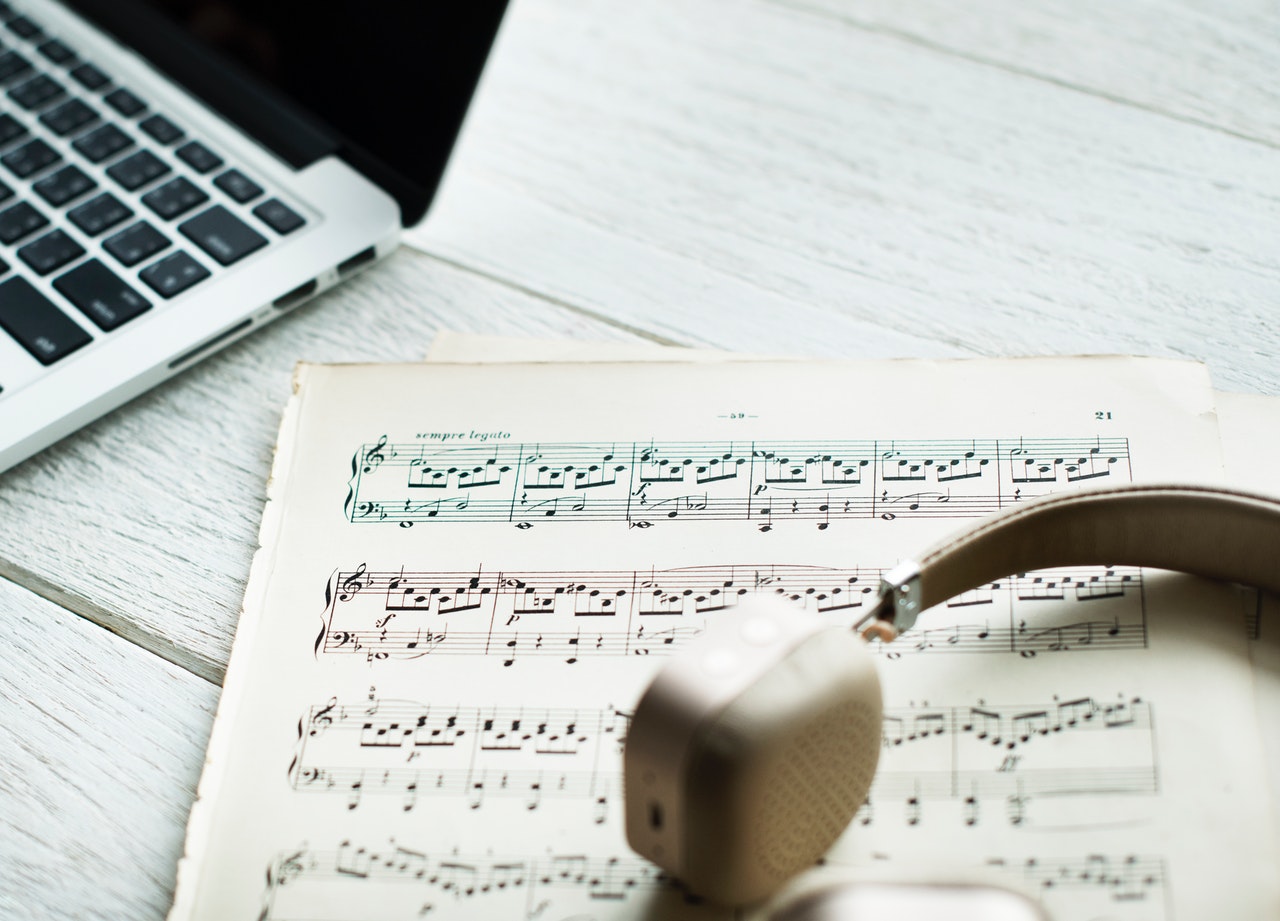 How About a “Reasons to Learn How to Read Sheet Music” Top Ten List?

How to Read Sheet Music 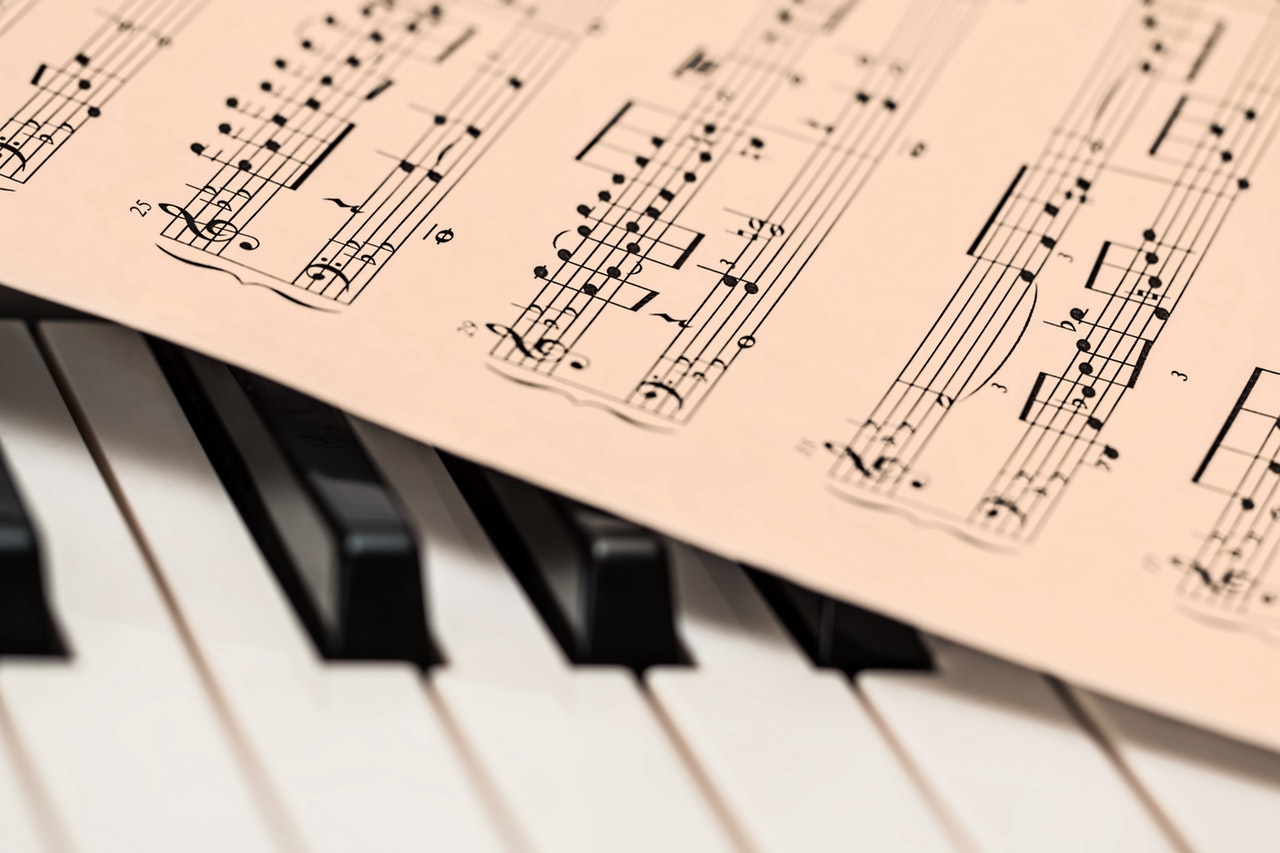 The best way to learn how to read sheet music is just to dive in. The basics are easy enough that we can present them here. Learn these concepts, and you already have the foundation for sheet music fluency.

Of all instruments, the piano may be the most orderly. All of the notes that the human ear can hear are lined up in a row of 88 keys. Notes represent pitches. Each note has its own key. For simplicity’s sake, let us consider only the 52 white keys on the keyboard. Ignore the 36 black keys for now. Best to keep things super-simple while you learn how to read sheet music.

Sheet music is organized the same way as the piano. This is a theme we will return to.

First, There Are Notes

There are seven basic notes in the written musical scale: A, B, C, D, E, F, and G. There is no H, I, J, or any other letter; just A through G. Go higher than G and the scale repeats. The next note is A again. The same note, but at a higher pitch. If you play both a high A and a lower A at the same time, your ear can tell they are the same note; just higher and lower versions of the same.

The same is true at the other end. Start at the original A, and the next lower note is a lower G, then F, the E, and so on.

Next, There Is the Five-Line Staff

Sheet music starts with a staff, which is the five grouped lines that run across the page. Just like English, the staff is read left-to-right, top-to-bottom. When you get to the end of a line of staff, you move down to the next line and start at the left again.

The Grand Staff Is Two Five-Line Staffs: A Treble Staff and Bass Staff

There are actually two different five-note staffs: the Treble Staff (higher notes) and the Bass Staff (lower notes). When shown together, the two are joined by vertical lines called braces. This is called the Grand Staff. To more clearly identify the parts of the Grand Staff, five-line Treble Staff is marked on the left side by the Treble Clef, and the Bass Clef marks the five-line Bass Staff.

The five grouped lines of a staff and the spaces between them equate to musical notes.

On the Treble Staff the “line” notes, starting at the bottom of the staff, are E, G, B, D, and F (Remembered with the pneumonic Every Good Boy Does Fine.)

On piano, the notes of the Treble Staff are played with the right hand. (This is not important yet, but it will be in a moment.)

The five lines of the Bass Clef are different notes from those of the Treble Clef: G B D F A (Good Boys Do Fine Always).

On piano, the notes of the Bass Staff are played with the left hand. (Still not important, but just you wait.)

Ledger Lines above and below the Staff Lines 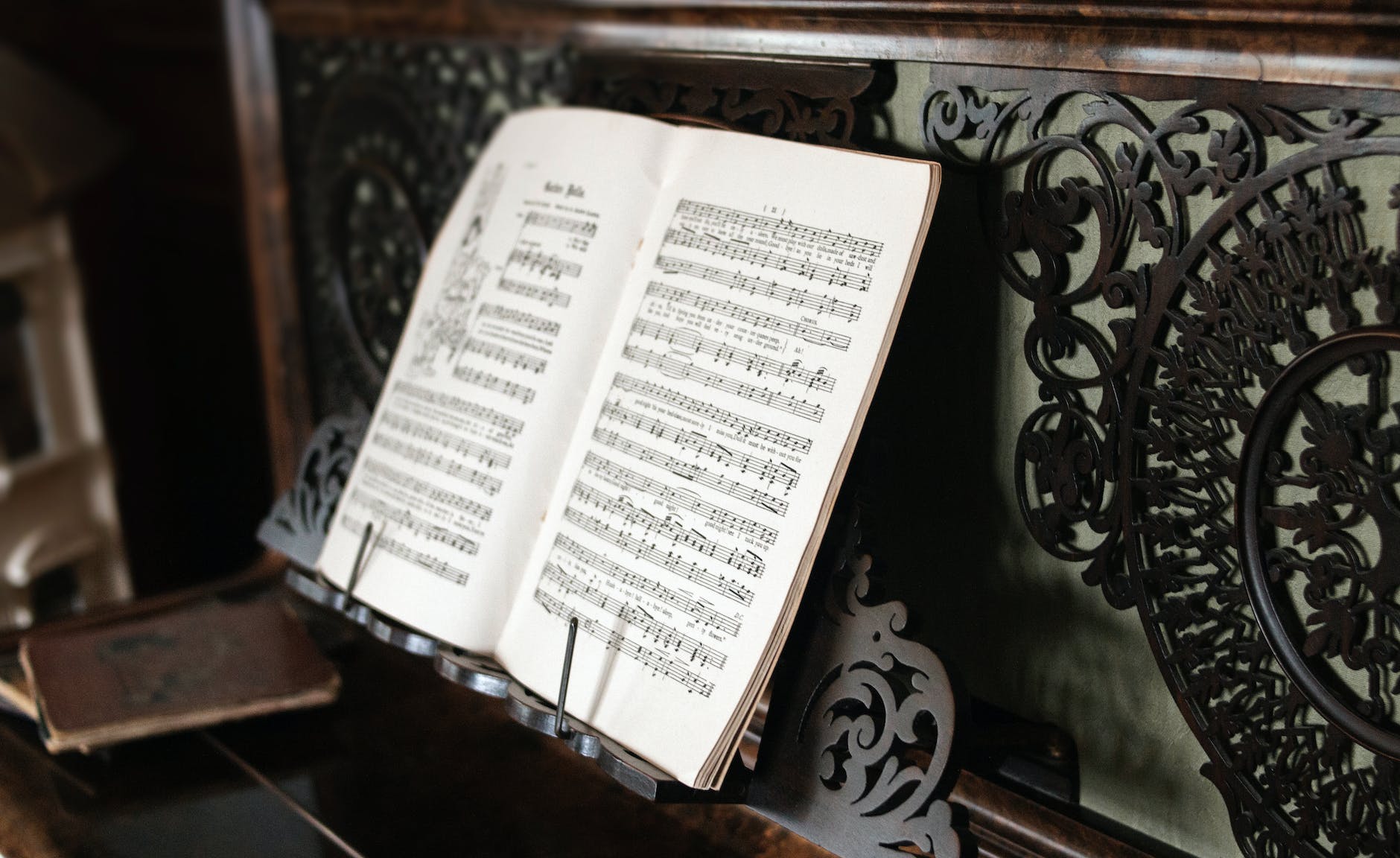 There are notes higher than and lower than both staffs. They continue in the same alphabetical sequence and are placed as though there were more than just five lines on the staff. The next note above the Treble Staff is a G. It is a “space” note. The next note up is an A. Because it would be on the sixth line of the staff, it is marked through with a short line (like a dash) to visually identify it as a “line” note.

Ledger lines work the same way beneath each five-line staff.

On the Treble Staff, the first space note below the first line is D. Below that is C, which has a Ledger Line through it.

But that C below the Treble Staff is a very important note: It is “Middle C.”

Middle C in the Middle

Middle C is the mid-point between the Bass and Treble staffs.

The first space note above the Bass Staff is B; the first Ledger-Line note is Middle C. The same Middle C as below the Treble Staff.

Now try this: Starting at the first line of the Bass Staff, read the notes going up:

Did we mention that it is very orderly to learn how to read sheet music? 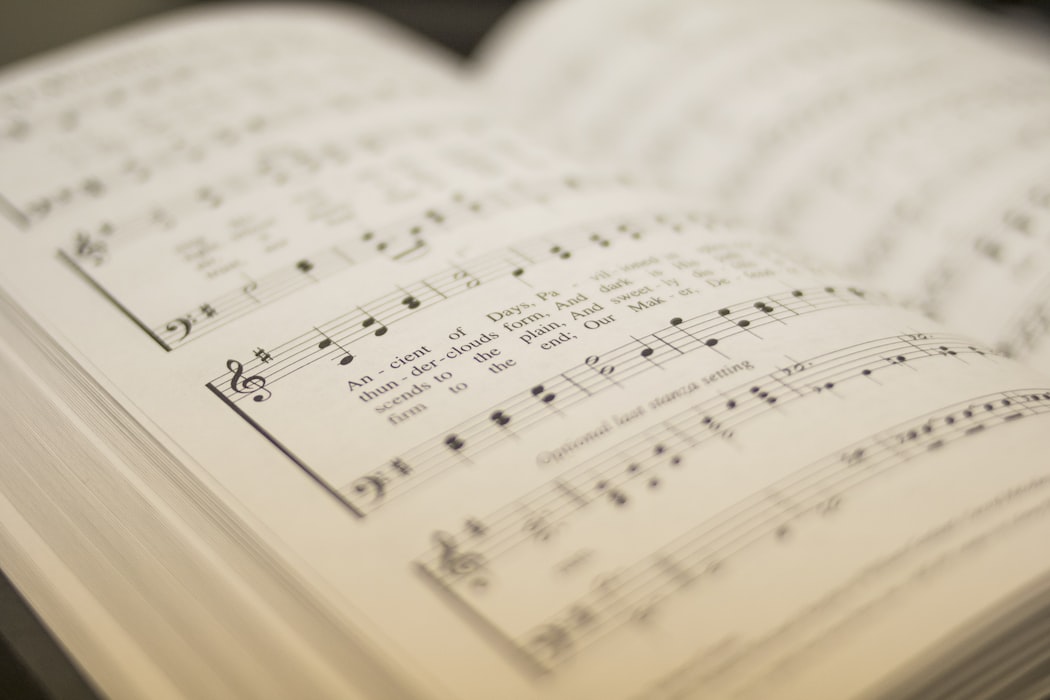 Did you think you would start to learn how to read sheet music by just reading this article/post? It really is that easy. Once you grasp the concept of where the notes are on the staff, a little practice will lock them in. Just as music is full of patterns, you begin to see the patterns on the page. Before you know it, learn how to read sheet music becomes notes memorized.

With the notes locked down, your major next step to learn how to read sheet music will be to understand how rhythm is represented via note counts. A system of flags tells you how short or long a note should be held.

But, we get ahead of ourselves. For now, we have established that sheet music is a fantastically efficient means of recording a composer’s full ideas for a piece of music so that another musician can reproduce that piece with all of the composer’s intent. We explored how this modern form of musical notation flourished in the wake of the Gutenberg press, with the advent of ways to inexpensively print and disseminate compositions. 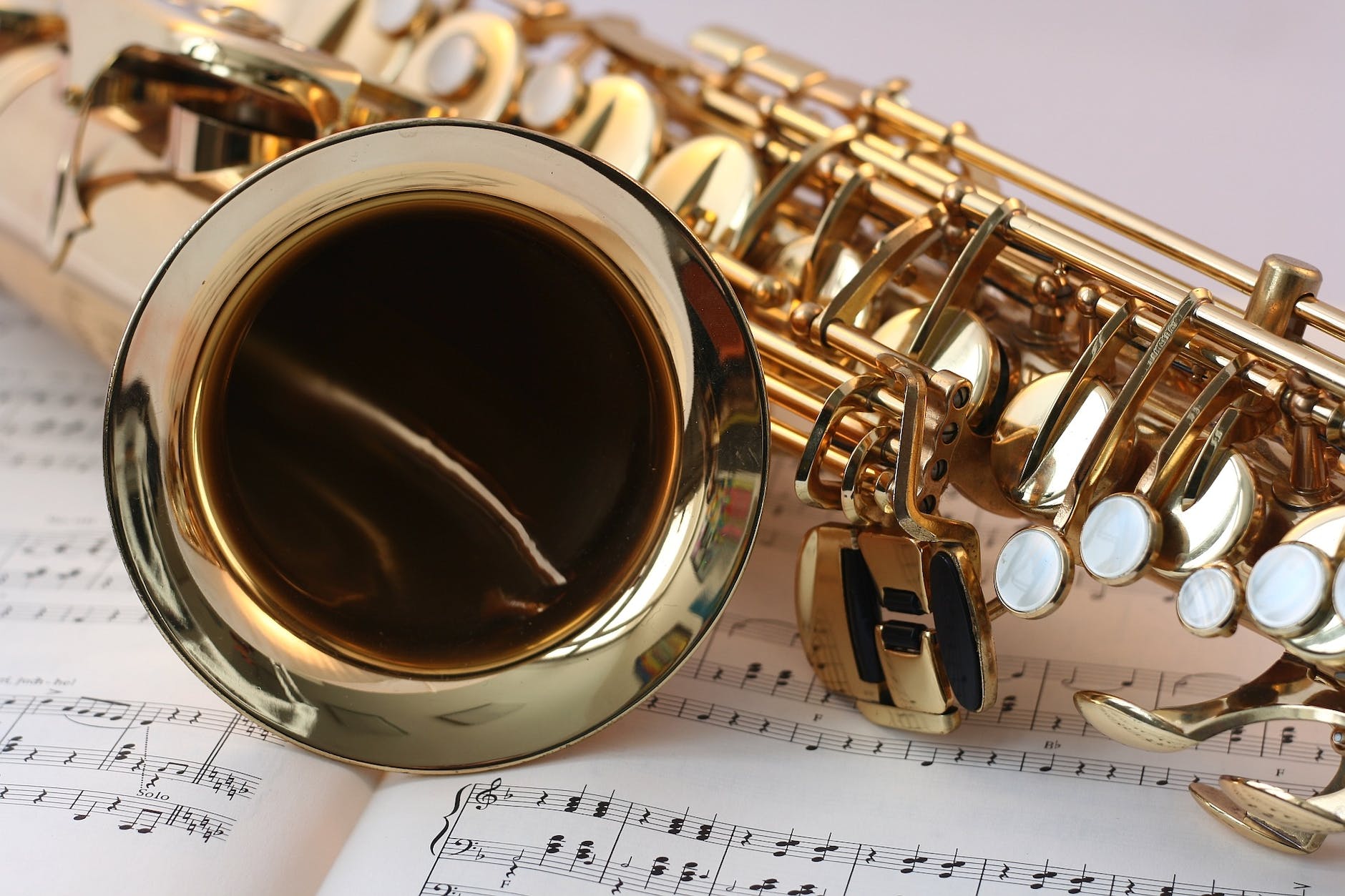 This meant classical composers could share their works widely with their contemporaries. It also benefitted us, in that we can read that sheet music and hear those works with nearly the same detail audiences would have several hundred centuries ago. We looked at ten reasons knowing how to read sheet music makes you a better musician. Then we finished with a first lesson in understanding how sheet music records notes.

The best part is that learning how to read sheet music can be done very efficiently online. There are plenty of resources, from written lessons to diagrams and videos to communities of peers and teachers eager to help. If you are already a musician, there many of these resources are tuned to your specific instrument.

These will show you the basic sheet music structure, how it relates to the unique characteristics of your instrument, and how it can be leveraged to help you better communicate with other musicians and harmonize with their instruments’ unique characteristics. The worst-case scenario is that your growing sheet music literacy makes you a better musician (and maybe gets you more gigs).